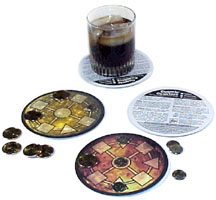 Cosmic Coasters is a cute little strategy game designed by Andrew Looney and sold by Looney Labs. (That's their product shot over to the right.) It's played on small game boards that are actually functional coasters! The coasters are sold in a little plastic bag, so if you're going to carry it around you need to figure out a better storage solution.

Some Mad Lab Rabbits figured out that the flat tins AOL sometimes uses to send out CDs were the perfect size for storing the four coasters and a collection of thin tokens for playing the game. The only problem I have with that idea is that I don't want to be carrying around an ad for AOL.

The answer is simple. Take the free tin that AOL is sending to you, and, rather than putting it in the trash so it winds up in a landfill, recycle it into a useful container through the magic of arts-n-crafts.

The main thing you need is obviously the tin itself. I don't know how AOL decides which potential customers receive which kinds of promotions, but it's quite clear that not everybody gets these puppies. I think the "DVD Box" and "Cardboard" carriers outnumber the tins by about 7 to 1. I've never received one at home, but we've received three of them at the 20 person company I work for.

Also you need decorative materials. I decided to use spraypaint since I have a stock of different colors left over from another project.

I wanted to make sure that the AOL graphics were completely covered (even though they are kind of nice underneath all the logos), so I used three layers of paint. First, I sprayed the whole outside of the tin flat black. I didn't bother to mask the parts that fit inside the lid, but you could easily do so with tape if you wanted. Then, I spray painted the whole outside glossy white to give the final paint job a bright foundation.

Once I finished "clearing" the tin, I painted it using the same diffusing technique I used for the tips of my Giant Icehouse Pieces. This was an easy way to get a somewhat interesting result. Once the paint was dry, I printed the Cosmic Coasters logo onto a sticker so people would know what's inside.